These photos to me are the living proof that anything is possible when you follow through on your dreams! Local 17yr old Ana Maria spent her early childhood days reading books like “My Side of the Mountain” and dreaming of becoming a falconer. Led by her imagination and a deep passion and love for wildlife, she worked hard, and passed all of the local and state tests to become a certified falconer apprentice. She is currently being mentored through other certified falconers. 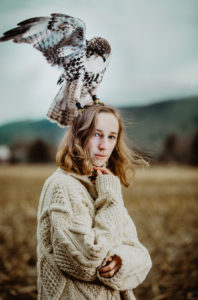 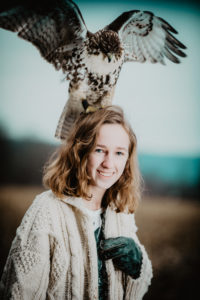 Last fall she trapped her first juvenile red tailed hawk, and thus her love affair with Caspian began. She spent weeks training him to fly untethered and return to her. While Caspian is clearly motivated by food, I can also sense a deep trust and bond that has developed between the two of them. Normally a hawk would be quiet and stay still when stressed, Caspian on the other hand, feels perfectly comfortable with Ana and squawks away at her, while trying to outsmart her about where his food bowl is.  🙂 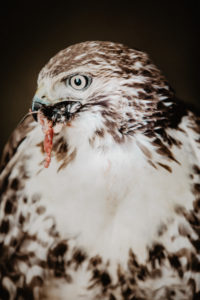 I’ve enjoyed watching their relationship grow over these past few months. Caspian had escaped from his enclosure, was and was likely chased away by another larger female hawk that had been perching up in a nearby tree. Ana put out a search for him. She spent week driving around trying to find him to no avail. Eventually she received phone calls from neighbors who lived along east shore drive in, Ithaca, stating that they had just seen the bird and heard his bells that were attached to his feet. Ana finally was able to re trap him, after him being MIA for weeks. 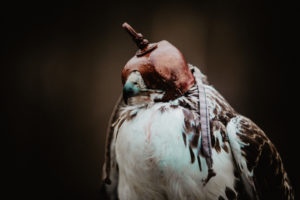 When he returned one of his claws was injured, so she is working to mend them, and keep a close eye on him as he grows in his back in his tail feathers.

She’s about to graduate this year from Ithaca High School and already runs a certified wildlife rehabilitation center out of her home. She will be pursuing her Bachelors in Environmental Science at #ithacacollege in the fall!!! 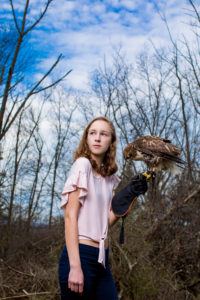 Success comes to those that work hard and don’t give up on their dreams, despite all of the loopholes and obstacles that are put in their path.  I’m so impressed by Ana’s dedication to educating not only herself, but others in the community. This past weekend, she taught a group of local homeschoolers about how she cares for the animals that she looks after. She inspires everyone who meets her~ and I feel honored to have captured some lasting memories from her journey with Caspian. 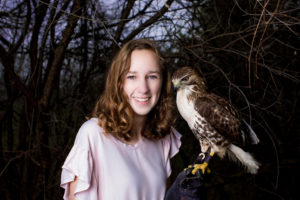 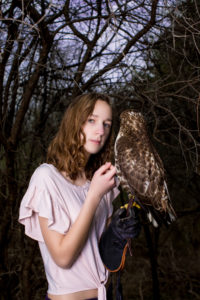