I had just finished a product photoshoot project for the magical herbal goddess Amanda David of Rootworks Herbals when she mentioned that her son was a senior and really needed to have his senior portraits done before the school year was over. I was like AMANDA!!! not only do I have your back for product photos whenever you need them, but I’ve ALSO got your back for your son. So we began to plan for his session that day.

Knowing that I photograph most of my clients in nature, Abiah decided he wanted something different, something that reflected his personal style. He definitely wanted something urban. I scouted some local locations, and we mutually agreed that the large graffiti wall on downtown building was an ideal setting!

Every year, our community has an event called. “Get-Up State” where over 50 talented graffiti artists from all over the world come together to paint up the local Cornell University Press building. You can find out more about the event by visiting this link HERE.  Its truly a work of art walking around this building and watching all of the hard work that goes into the graffiti.

We arranged to meet and do a walk around the building  in the last few hours before sunset. When we arrived, there was actually a local hip hop group there with a drone camera shooting footage for their new music video. They already had music blasting, and it was just perfect timing! The building is rather large, so we walked around to the other side where they weren’t using it. Plenty of amazing graffiti art to go around in this place for everyone!

When we started out, I was asking him to pick out his favorite walls, and Abiah pointed out a rusty metal cage that was nearby and suggested we add it into the frame. His mom was like…”um, ok Jamie, I’m going to trust you on this, you’re the photographer” and started cracking up.. I mean how could a rusty metal cage look appealing at all? Well…here were the results! Abiah was totally right on with this suggestion, not only does he have style, he has creative vision too! 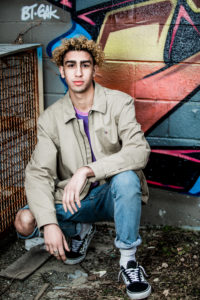 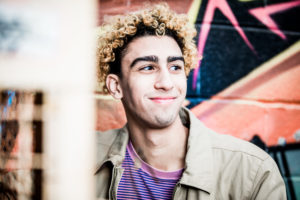 Walking around some more, we found a few walls that happened to match one of the shirts he brought perfectly…so we went for it. I mean its almost like we intentionally styled it right?! Well, it was just coincidence, but I’m digging the results. Abiah seriously has some style, and was so easy to work with. 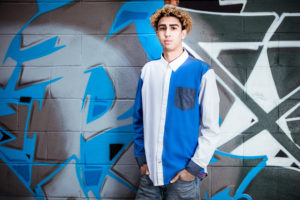 The smiles I got out of him, were in part due to the fact that I was either laying down in puddles of water to get the shots, or standing on top of a bucket that we found while his mom held my hand so I wouldn’t fall of it. It was quite the scene! Being short has some perks, but when photographing tall seniors, I often bring something to stand on to get more at their eye level. 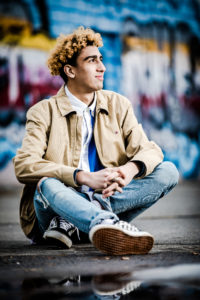 so yeah, I was laying on the ground for this one… 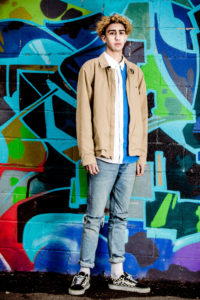 ….and on a bucket for this one hahaha 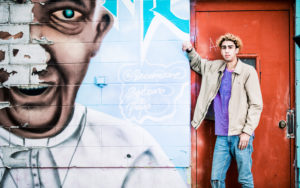 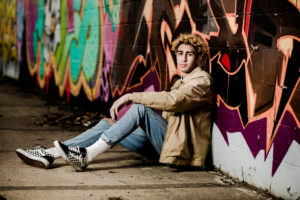 After an hour of shooting, it was starting to get dark, and so we captured a few last shots with some more moody lighting and I really love the results. Abiah was so much fun to work with, and we had a great time laughing with his mom. It was for sure a time none of us will forget. 🙂