I don’t usually get phone calls in the middle of January requesting senior portrait sessions. In Upstate NY, its COLD!!! However, Brandi had been patiently waiting to have her session done once her braces came off (and before the yearbook deadline) So we decided to tough it out and create something sweet to celebrate how awesome she is.

She mentioned her interest in waterfalls, smoke bombs and downtown Ithaca~ three things/places that she felt inspired by and thought were beautiful. As far as waterfalls go mid January in Ithaca, NY there aren’t a whole lot of options in terms of accessibility. Treman, Watkins, and Buttermilk upper trails are all closed this time of year. Ithaca Falls is undergoing lead remediation, Lick Brook is quite a hike in (and not ideal without some nice boots) So Taughannock Falls it was. Her mother and her, being all the way from Waverly, NY had never been there before and were excited about the adventure. 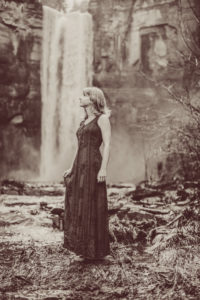 When we arrived the base of the falls was flooded from the previous few days of rain, and so there was one tiny little space for us to stand. We climbed down in as far as was safe and froze our butts off, ok, well maybe just our arms and hands. When I’m shooting in 30 degree weather while waterfall mist is spraying in my face, I have to take extra care that my camera doesn’t get full of frozen droplets of water and crack my lens. I came equipped with warm jackets, and fingerless mitts. Brandi was an absolute legend for withstanding the frigid air in that gorgeous dress she picked out just for her session. Her grace astounded me, and the humor was a plenty. This girl know how to laugh. 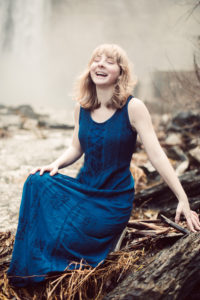 After a good 15/20 minutes of freezing, we bundled up and headed towards the lake where we were planning to attempt firing off some smoke bombs. En route, we had to stop along a rock bed because, well LOOK AT HER in this hooded coat!!! She’s amazing! 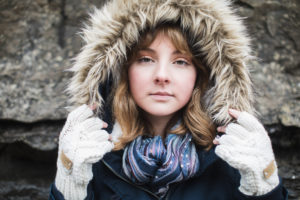 When we arrived at the lake we were met with blustery winds, and a insane windchill. We decided to try and tough it out and see what we could get. I set up my light, had my son (who was on hand to help assist) hold onto it for dear life so that the wind didn’t make it come crashing down. It took a few tries, but we managed to get a few great shoots with the smoke bombs (which as you can see were blowing right behind her with all the crazy wind) When you’re photographing people with smoke bombs, I always instruct my models to put their hands over their heads as to avoid getting any dye or smoke in their faces, this is of particular importance if wind is ever a factor. 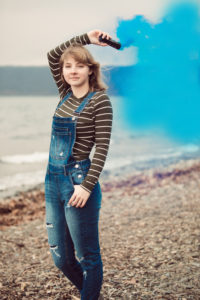 Between shots Brandi’s mom would huddle around her and attempt to keep her warm for just a few minutes. Our fingers were numb, but hey, we got the shot! 🙂 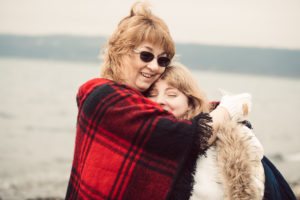 After another good 10 minutes of freezing we called it, and bundled up with some gloves, a hat and the CAR HEATER and drove to downtown Ithaca. The car ride was just enough of a defrost for us all to feel ready to brave the cold again on the Ithaca Commons. This time, she dressed warm and we rather enjoyed walking around in the cold air. 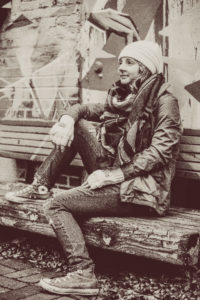 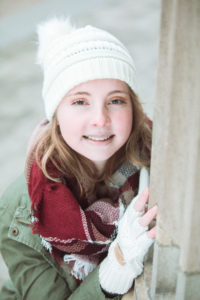 After a nice half hour stroll around downtown Ithaca finding random places to photograph her in, we then headed over to Press Bay Alley, which is a small little row of shops adjacent to the commons. There is where I decided to go for the formal gown shots. Brandi did a quick change of clothes in a nearby restaurant bathroom. We did some makeup reapplication, and got the hair iron out, and voila, she went from an urban look to glam in less than 10 minutes!

By this time, it was completely dark outside, and all that we were working with was the ambient light of the shop windows, and the lights that strung across the alley. Truly, it was ideal lighting. I got out my location lights, played around with the settings and we created this magic which really illustrates what an absolute queen she is. 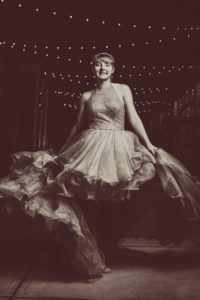 There are plenty more where that came from~ by that time we headed back to my studio where we could continue with some studio shots of her in the dress, as well as with her medals. Brandi just happens to be an all star track athlete!! I was astounded when she pulled out medal after medal of each and every one of her accomplishments over the years. 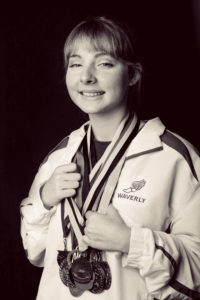 Several hours, and 4 locations and wardrobe changes later we were done. Mission senior portrait session in freezing temperatures in upstate NY complete!!! What I love most about Brandi is her playful spirit, joyful heart and her willingness to shine in the face of adversity. This girl loves to laugh and is capable of accomplishing anything she sets her mind to. I see so much of her strength shining through in these portraits and I’m so grateful that I got to know her through this incredible experience. 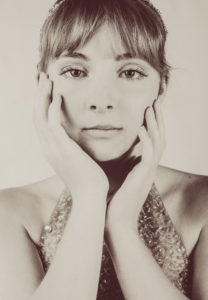